Halloween has arrived and despite their recent troubles, the Brimblebanks family is ready to celebrate the way they like best – with spooky stories!  First up, Millicent Brimblebanks brings us this tale of a monster… and the

n another monster.  And also people who are kind of monsters, am I right?  Also, not-terribly-subtle social commentary for a not-terribly subtle age. Written by Brodie H. Brockie and Leah Bauer and starring Leah Bauer as Millicent Brimblebanks.

This episode was brought to life by the voice talents of  Patrick Johnson as Dr. Accurize and Elder Remington, Brodie H. Brockie as Elder Winchester and Bentley Brimblebanks, Colleen Stano as Conner and Elder Browning, Justin Vidovic as the gatekeeper and Elder Skiptomyloo, and Leah Bauer as Doracle the Oracle.

No commercial this episode, and the science kids are off researching science or maybe just accidentally gluing their hands together with superglue.  I guess maybe that counts as science?  Maybe everything does if you squint at it enough.

Speaking of which, here’s The Second Monster…

Posted on September 30, 2016 by brimblebanks

The gang is all here – Bentley, Jameson, Millicent, and Lucinda Brimblebanks may have issues to sort out, but they’ll have to survive the latest plot by the Mysterious Adversary if they’re going to do it.  But who is the Adversary, and why does he hate the Brimblebanks and their stories?  His secrets are finally revealed

here and so are many of the family’s secrets too. If the adversary can stop the brothers and sisters from telling a story – will the walls of reality really begin to break down?  Find out in – “Fissures in the Dam!” written by Brodie H. Brockie and Justin Vidovic and starring Brockie as Bentley Brimblebanks, Vidovic as Jameson Brimblebanks, Colleen Stano as Lucinda Brimblebanks, and Leah Bauer as Millicent Brimblebanks.

This episode was brought to life by the voice talents of Jared Hoffert as the Mysterious Adversary, Peter Dannug as Young Mortimer and Tobin, Ryan N. Wilcox as Aloysius Brimblebanks, Claire Fry as Miriam Carroway Brimblebanks, Scott Longpre as The Unknowable Terror, and Lisa Gavan as Ms. Carsonwy.

This episode’s commercial is “Gee Your Commercial smells like Desperation” was written by Brockie and stars Christina Holder and David Melcher with Grayson Wilcox.

The Science Kids learn about Flapjacks was written by Brockie and stars Hayla Alawi and Amanda Burch.

And now, grab a roll of duct tape, because we’ve got “Fissures in the Dam…”

ep17 – The Happiest Days of Our Lives

It’s back to school time, both here and in the world of fairies,  but Bluebell the fairy and her friends don’t have any idea what’s waiting for them at the Larkspur School.

This episode’s story is brought to life by the voice talents of: Amanda Wilhoit as Bluebell; Lisa Gavan as Ms. Carsonwy, Mrs. Shoshaloshee, and the school nurse; Peter Dannug as Tobin, Guz, Mr. Wobnob, and Bluebell’s dad; Desirae Nelson as Principal Nettles and Bluebell’s mom, Emily Naud as Daffodil, and Jared Hoffert as the Mysterious Adversary.

We’d love to hear from you, tell us what you think of the show by writing to us at brimblebanksbrothers@gmail.com.

And now, remember your own time at school and wonder, were those really The Happiest Days of Our Lives:

The Brimblebanks Brothers return to their own show, but where do we find them? And cut off from Brimblebanks manor and Voxbot 5000, can they still tell stories? Find out as Bentley and Jameson attempt to tell the
previously untold tale of Davy Crockett and the Titanic murders in “That Sinking Feeling” written by Justin Vidovic and Brodie H. Brockie and starring Vidovic as Jameson Brimblebanks and Brockie as Bentley Brimblebanks.

Leah Bauer returns as Millicent Brimblebanks. Brent Dobrovits and Shean Rhead play a pair
of prisoners. And everyone else is played by Brockie and Vidovic. Or they’re just playing Bentley and Jameson and Bentley and Jameson are playing everyone else. Something like that. Anyway, you’ll hear how it is.This episode’s commercial is Aunt Aggie’s Breakery, and darned if Brockie and Vidovic don’t perform that too. They’re just not sharing this month.

Next month, Millicent and Lucinda will be back, and the Science Kids too! But not it’s time for some historical fiction. Grab your life jacket and get ready for That Sinking Feeling!

Season Two begins with super heroic action as new hosts, Lucinda and Millicent Brimblebanks tell the story of Sarah Spiner, a young woman who inherits super-weapons from her villainous father. Will she follow his path or create “A New Spin” on his old ways? Meanwhile, Millicent and Lucinda learn to work together as storytellers – but is one of them hiding a secret of her own? Plus The Science Kids make their first appearance and a commercial for a superhero naming company.

This episode’s story was brought to life by the voice talents of:

The Science Kids Learn about Fingernails was written by Brodie H. Brockie and stars Hayla Alawi as Jody and Amanda Burch as Dody.

Special thanks to Lisa Gavan of Gavan Photo for our publicity pictures and to the Ferrari family for loaning us Chazzy to model as Dumas.

Now, look there on the screen. It’s a bird, it’s a plane, it’s a Brimblebanks: 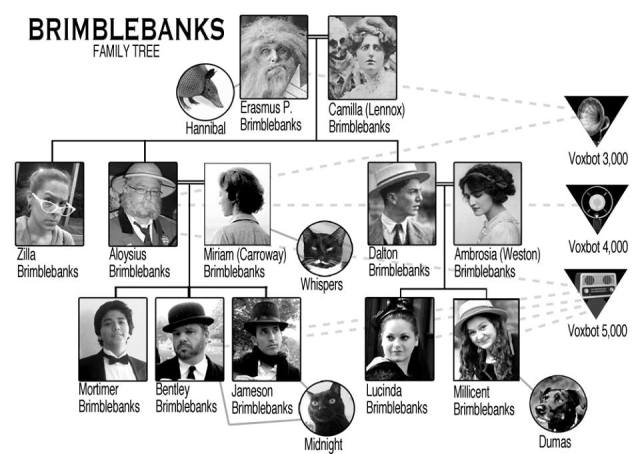 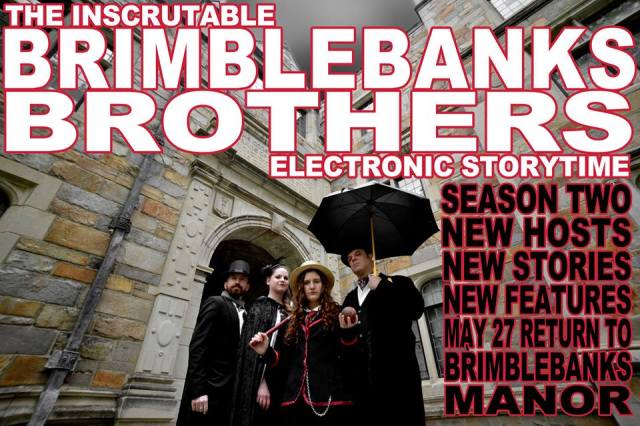